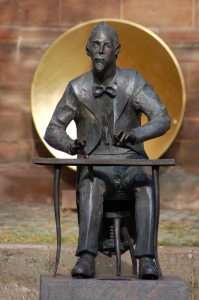 09/05/1814 Georg Martin Adolph Henselt is born in Schwabach, in the dwellinghouse of the former Cotton manufactory, today 13 Penzendorfer Straße.

In his first marriage he was married to Dorothea Börner (1776 – 1805), in his second marriage to Carolina Geigenmüller

23/01/1817 The Henseltfamily, now with 6 children, moves from Schwabach to Munich. There the father leases the cottonmanufactury of the Count of Arco on Oberköllnbach.

In Munich, three more children are born who, however, already die as babies.

1820 Henselt attends the St.Anna-Suburb elementary school and then, probably from 1824 on, the Latin school.

1822 Henselt´s older sister is given pianolessons, Adolph himself, for the timebeing, is given violin lessons.

28/11/1832 Henselt gives his second public concert at the Munich Odeon.

1833 First own compositions, which are published much later.

25/06/1836 In Berlin, Henselt plays in a private circle at the house of the instrument-maker to the Royal Prussian Court Heinrich Kisting (1780 – 1856). It is probably in Berlin where he gets to know Carl Banck, which is the beginning of a close, lifelong friendship.

Mid-1836 Because of his poor health, due to exertions and stress, Henselt takes a cure in Karlsbad.

11/01/1838 Henselt gives a public concert in Dresden. This is his last public performance in Germany.

(all dates according to the Julian calendar)

21/03/1838 First public concert in Russia in the Great Theatre of St.Petersburg. After the overwhelming success he follows the wishes of the czar and stays in St.Petersburg.

May 1857 Visit of his son in Breslau on the trip from St. Petersburg to Gersdorf.

04/01/1866 Selling the manorin Gersdorf for 67,000 thalers to the Dutchman Dr. jur. Reinhardus de Graaf after a little more than 13 years (Gregorian calendar).

1868 Henselt writes the text book “Some remarks and long-term experiences about teaching the piano. As a guide for teachers and students in the imperial institute and for teaching of all concerned” . It is published at Th. Stellowsky in St. Petersburg.

middleof 1875 Marie Lipsius (as a writer she called herself La Mara) publishes the third volume of the “Musical studyheads”, containing a chapter on Henselt.

Dec. 1880 Henselt composes a cantata for the 50-year anniversary of the cultural and social work of Prince Peter of Oldenbourg.

12/05/1883 Honours for the 25-year anniversary as ageneral musicalinspector in St. Petersburg.

1887/1888 Henselt is a professor for piano at the conservatory in St. Petersburg.

10/10/1889 Henselt spends his annual summerholiday in Warmbrunn. There he dies in presence of his wife and good friends.