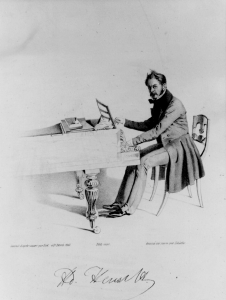 Dr. Oskar Stollberg
The Henselt research in the birth town Schwabach started with Heinrich Krauß and Heinrich Schlüpfinger in the first half of the 20th century. But the main research did the church music director Dr. Oskar Stollberg. From 1929 until 1969 Stollberg was director of the town’s chantry and also district cantor.

He researched on music education and musicology, and was founder and main initiator of the Henselt research. Schwabach owes him the vast material about Henselt in the town museum which is now mostly kept in the so-called Henselt archives. In 1993 Stollberg was entered into the honorary book of the town of Schwabach.

Richard Beattie Davis and his wife visited Schwabach regularly until his death in 2008. As a lifelong passionate collector of Henselt artefacts he supported special exhibitions at the town museum with loans and the Henselt archives with generous donations. In 2004 he bequeathed the archives of the town museum his whole collection of printings of Henselt music and musical autographs.

Important:
We are not allowed to copy scores for reproductions. But we can help you to find the archives that have the originals.